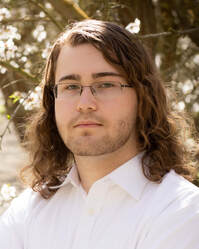 ​Tristen Collinsworth is the current graduate associate for the bassoon studio, pursuing a Master of Music in bassoon performance. Before coming to Baylor, he studied at the University of the Pacific Conservatory of Music in Stockton, California, where he studied with Nicolasa Kuster. He performed with the Pacific Conservatory's University Symphony Orchestra as a winner of their concerto competition in September 2021, where he performed Weber's Andante and Hungarian Rondo, and played with the Modesto Symphony Orchestra in Modesto, California in May 2019.

Outside of bassoon, Tristen enjoys learning other instruments, hiking, and cooking.

Alex Dueñez is from Houston, Texas where he attended Kinder High School for the Performing and Visual Arts and studied bassoon with Robyn Watson. He has performed with the HSPVA symphony orchestra, the Texas Music Educators Association All-State band, the Interlochen Arts Camp World Youth Symphony Orchestra, which he attended on a full tuition scholarship, and he was a member of the Houston Youth Symphony for his senior year. He is a bassoon performance major and is also completing prerequisites for nursing school.
​ 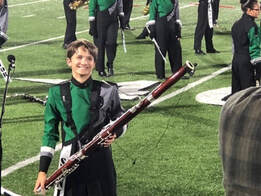 Sam James will be a sophomore at Baylor pursuing a Bachelor of Music in Bassoon Performance. he is from League City, Texas, where he attended Clear Falls High School and studied with Robyn Watson. He has performed with the Texas Music Educators Association Symphony and Philharmonic orchestras, was a member of the Houston Youth Symphony for 6 years, and has been a part of the Sewanee Summer Music Festival for 4 years.

When not playing, Sam enjoys playing video games and hanging out with friends. 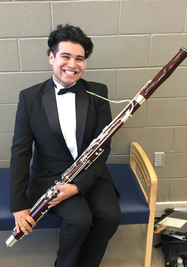 Joseph is currently a junior Music Education Major at Baylor University. Native to Dickinson, Texas and a graduate of Dickinson High School, he has studied under Jan Cutting since May of 2015, when he began playing bassoon. Since then, he has participated in the AFA Summer Music Conservatory in Houston, TX, both in 2016 and 2017, and is currently performing with the Baylor Symphonic Band. When he is not practicing or making reeds, Joseph enjoys spending quality time with his friends and family.