Special Someone is a short jazzy duo for horn and bassoon. It is also available for other instrument combinations. Catherine Likhuta is an Australian-based composer, pianist and recording artist. Her music exhibits high emotional charge, programmatic nature and rhythmic complexity. Catherine’s pieces have been played extensively around the world, including highly prestigious venues such as Carnegie Hall (Stern Auditorium/Perelman Stage), Glyndebourne Opera House (Organ Room), five International Horn Symposiums and two World Saxophone Congresses, as well as many festivals and conferences. Her works have enjoyed performances by prominent symphony orchestras (such as Melbourne Symphony Orchestra and Orchestra of the National Radio of Ukraine), chamber ensembles (such as Atlantic Brass Quintet, Ensemble Q, NU CORNO and U.S. Army Field Band Horns) and soloists (including former president of the North American Saxophone Alliance Griffin Campbell and president of the International Horn Society Andrew Pelletier).

Sonata della speranza “Sonata of Hope” for bassoon and piano by Howard J. Buss was written for Ann Shoemaker and is dedicated to the memory of bassoonist Eric Van der Veer Varner. When work on this sonata began in the autumn of 2019 it was being composer for Eric, a friend of the composer. After Eric’s sudden, tragic death shortly thereafter, the project was shelved. Work resumed in the spring during the COVID-19 pandemic. At the time, Italy was the epicenter of the crisis and the composer, having friends living there, was deeply concerned with their welfare. As the composition developed, Italy overcame the worst of the ravages of the disease, and the pandemic took firm hold in the United States. The composer wrote much of the Sonata della speranza while at home in Florida adhering to governmental shelter-in-place orders.

The three movements address an array of emotions the composer experienced following the death of his friend and during the pandemic. The optimistic character of “Auspicious Sunrise” radiates the hope imbued in the morning glow of a new day. The musing nature of “Introspective” reflects the inner dialogue often experienced during the extended periods of social isolation. The buoyant, and at times whimsical third movement, “Serendipitous,” combines elements from the previous movements with new material: The music exudes an optimistic, forward thrust, while incorporating feelings from the daily experiences of living through the pandemic.

Howard J. Buss (b. 1951) is recognized internationally as composer of contemporary classical music. His compositions have received critical acclaim, have been performed in more than 50 countries, and are frequently featured at national and international music conventions and festivals. They have been performed by musicians from universities as well as current and former members of organizations such as The Boston Symphony Orchestra, Minnesota Orchestra, Buffalo Philharmonic, Israel Philharmonic, Berlin Philharmonic, Vancouver Symphony, Atlanta Symphony, New York Philharmonic, Chicago Symphony, etc. A copy of his patriotic composition Fanfares is included in the Presidential Collection of Ronald Reagan. Buss’ more than 280 published works include instrumental solos, chamber music, symphonic, choral, and band works.

What Can I Do? (2021) by John Steinmetz
From the composer:
I grew up adapting to the way of life I was born into—with its internal combustion engines, household machines, supermarkets, factories, throwaway plastics, and other features of industrialized society. I assumed it was normal, but, as you know, this way of living has been heating up our planet so much that humanity may not survive. And we are taking other species down with us—and entire ecosystems. This way of life may feel familiar to me, but it is not normal; it is destructive.

In order to stop this destruction and restore our habitat, we in the industrialized world will need to make changes to the way we do things. As you may have notices, humans often resist change. But I hope we will be able to make necessary shifts. Many of us think that the changes could bring about ways of living that are more vibrant, enjoyable, and meaningful than what we have now. (One encouraging scientific study of the logistics is “Mobilizing for a zero carbon America: Jobs, jobs, jobs and more jobs,” by Saul Griffith and Sam Calisch.) I believe that we can do it, if we work together, and if we do not leave humanity’s future in the hands of the rich and powerful. I would like humans to continue to live and love and participate in the wonders of this astonishing planet. This piece is a small gesture in that direction.

John Steinmetz lives in Altadena, California with his wife, violist Kazi Pitelka, and various vegetables, flowers, and fruit trees. Born in Oakland, California in 1951, he grew up in Fresno, moving to southern California to attend California Institute of the Arts. Afterward he got swept into Los Angeles' freelance whirlpool.

By now John's music has been released on more than fifteen recordings from various artists and groups.

One and Many, which features children and guest musicians performing alongside a professional ensemble (including sections composed by the children), was featured by the Apple Hill Chamber Players on their "Playing for Peace" tours in the Middle East and Northern Ireland. Mixed Blessings and War Scrap were commissioned by the innovative Los Angeles series Pacific Serenades. Prairie Blessings combines a solo bassoon with a computer, electronics, and slides of unplowed Illinois prairie. His sextet Simple Pleasures was commissioned by the South Bay Chamber Music Society to commemorate their 40th anniversary in 2003, a month before the first performances of his new Concerto for bassoon and orchestra, commissioned by the Los Angeles Chamber Orchestra, the Keene Chamber Orchestra (NH), and the Santa Rosa Symphony. In 2009 the Amman Symphony Orchestra in Jordan premiered his Together for orchestra, beginning string players, and guest musicians playing local music (in this case, playing the traditional Arabic instruments oud and qanun).
John has also written comic pieces that poke fun at the concert ritual and other human foibles. In Possessed a solo cellist speaks the thoughts that run through a performer's mind during a concert. The Creation of the World for solo bass covers the whole of history with music, a beach ball, a headlamp, and individually-wrapped cheese slices. What's Your Musical I.Q. (A Quiz) combines musical examples and test questions to parody music appreciation classes, standardized tests, and magazine quizzes.


Jeff Scott’s Elegy for Innocence was commissioned by Imani bassoonist Monica Ellis, who premiered it at the International Double Reed Society convention in 2009. “The commission came at a time when I was thinking about my personal growth and the realization of what my life expectations were,” Scott said. “And when reality is mixed in with that — you basically have to make lemonade. That very premise is how I started to think about source material for the piece.” The one-movement work explores a variety of styles, including a tender opening, powerful cadenzas, and an exciting ending.

Jeff Scott served as French hornist of the Oberlin-founded ensemble Imani Winds for more than 20 years, a position that took him to Carnegie Hall, Walt Disney Concert Hall, the Kennedy Center, and countless other prominent stages—as well as the stage of Finney Chapel for an Artist Recital Series performance in 2014. With Imani Winds, he led master classes with hundreds of students every year.

Scott has been a member of the Alvin Ailey American Dance Theater and Dance Theater of Harlem since 1995, and he has performed numerous times with the Jazz at Lincoln Center Orchestra under the direction of Wynton Marsalis. He was an orchestra member for The Lion King’s Broadway run from 1997 to 2005, as well as the 1994 revival of Show Boat.

In the studio, Scott has performed on movie soundtracks by Terence Blanchard and Tan Dun, and has collaborated with the likes of Chick Corea, Wayne Shorter, Chris Brubeck, Jimmy Heath, and others. He has toured with the backing ensembles of Barbra Streisand and Luther Vandross.

Insatiable in his appetite for all aspects of the creative process, Scott has served as composer or arranger for a multitude of projects, including an Off Broadway production of Becoming Something: The Story of Canada Lee and the staged production of Josephine Baker: A Life of le Jazz Hot!, in addition to many original works for solo winds and ensembles of all kinds.

​Scott is a graduate of the Manhattan School of Music, where he studied under David Jolley. He earned a master’s degree from the State University of New York at Stony Brook under William Purvis, and he continued his studies with Scott Brubaker and Jerome Ashby. 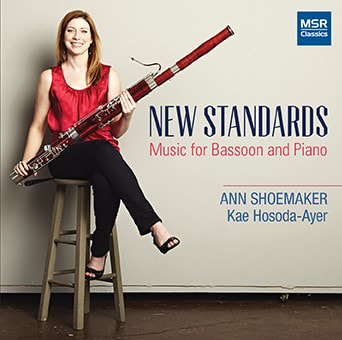 New Standards: Music for Bassoon and Piano was released January 2017 by MSR Classics. You can purchase a copy directly from MSR: http://www.msrcd.com/catalog/cd/MS1625

Or through Amazon:
​https://www.amazon.com/Ann-Shoemaker-solo-bassoon/s?k=Ann+Shoemaker+%28solo+bassoon%29
Powered by